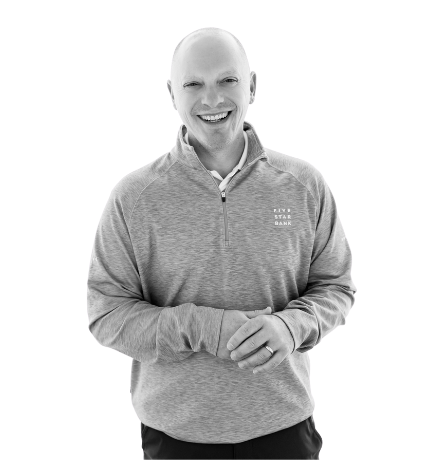 Back to Team
Senior Vice President, Director of Specialty Finance
Jason Hartmann has over 22 years’ of experience in commercial banking, including 8 years specializing in emerging growth and technology banking in the Silicon Valley and a subsequent 14 years of specializing in commercial middle market and commercial real estate lending in the Bay Area and Sacramento Regions. Jason joined Five Star Bank in February 2013.

While Jason has experience working with all industries and business models, at Five Star Bank he has built-out the Specialty Finance Division which has a specific focus on financing and servicing treasury and cash management needs of both Manufactured Housing Communities (MHCs) owner/operators and self-storage owner/operators. This division has seen significant growth over the past 7 years and Five Star Bank is considered an industry expert in both asset classes.

Jason represents Five Star Bank in the Roseville Chamber of Commerce, Rocklin Chamber of Commerce, and is a coach and the Assistant Director of the Woodcreek High School Mountain Bike race team. He is also an Allegiant Giving Partner. Jason also represents Five Star Bank in the Western Manufactured Housing Association (WMA) and the California Self-Storage Association (CSSA).

Jason holds a Bachelor of Science degree from the University of California at Santa Barbara where he studied Macroeconomics and was an officer of the UC Santa Barbara Gaucho Rugby Club.

We create value by improving streets and infrastructure and bringing homes to fill additional spaces in manufactured home communities. Jason Hartmann and Five Star Bank understand the business aspect of what we do and what it takes to go in and create value.
Eli Weiner, Founder & Owner, BoaVida Group
BoaVida Group is a manufactured home community which owns and operates more than 158 properties with more than 16,500 spaces. Eli is the 8th largest owner and operator of manufactured housing communities in the United States.
Jason Hartmann
916.626.5013
jhartmann@fivestarbank.com